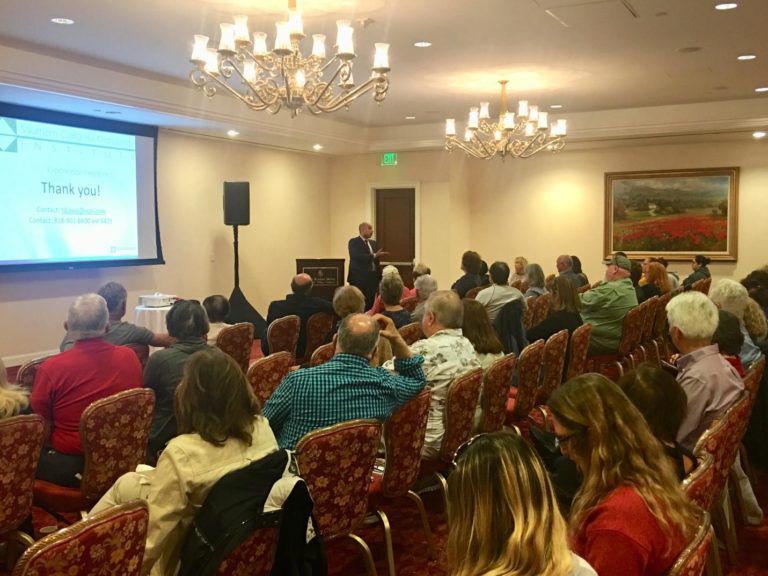 Dr. Bawa gives a talk to over 115 potential patients at the Four Seasons Hotel, Westlake Village about the advantages of robotic assisted hip and knee replacement surgery. 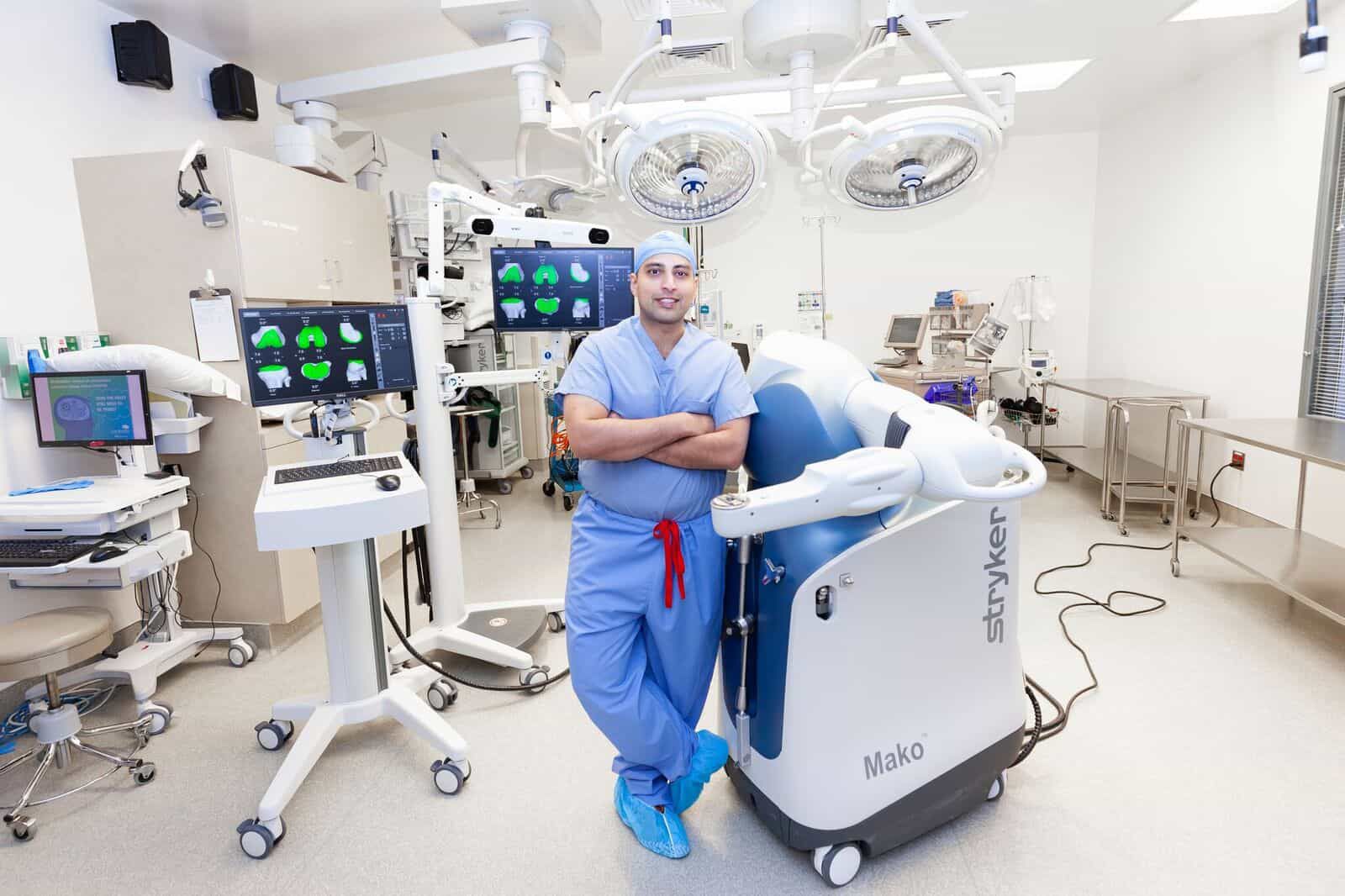 The new and cutting-edge Stryker Mako Robotic Arm is in Thousand Oaks and said to be making an impact on the southern Central Coast Region.

The robot, costing over $1 million, was purchased by Los Robles Hospital and Medical Center and placed at the Thousand Oaks Surgical Hospital campus to provide greater accuracy to patients undergoing elective total hip, total knee and partial knee replacement surgery. The hospital is the only facility to provide robotic-assisted joint replacement to patients between San Luis Obispo and Glendale. 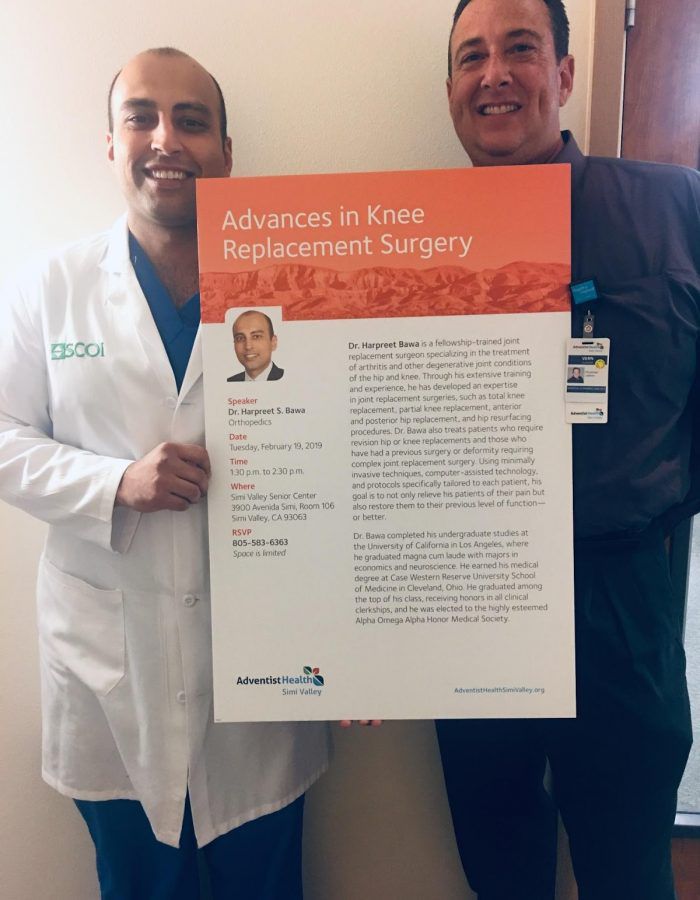 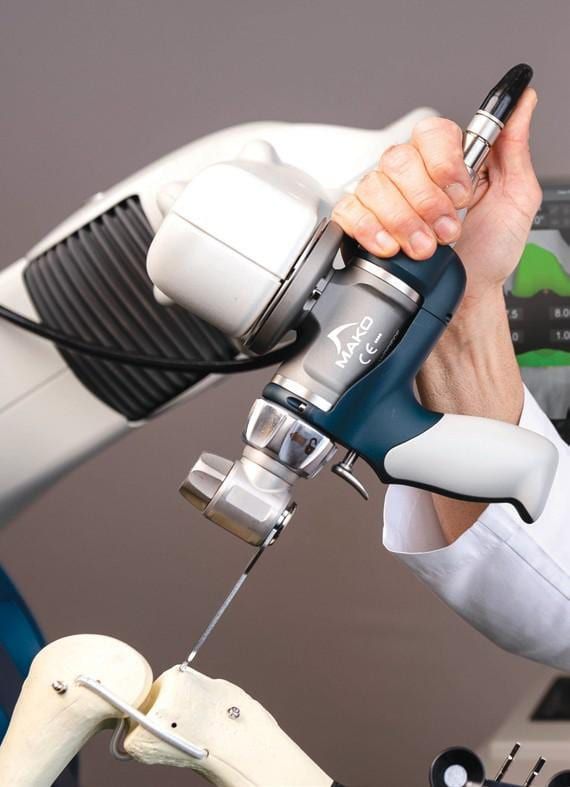 Author and sports TV personality John Brenkus’ physically active lifestyle had caused much of the cartilage and some of the bone in his knee to wear away. The pain got so bad, it made it difficult to walk, let alone run, swim or cycle.Desperate for relief, the 47-year-old amateur triathlete traveled from his home in Park City, Utah, to Ventura County in December to undergo a dual compartmental knee-replacement surgery using new robotic technology offered by Thousand Oaks Surgical Hospital.

Reporting back six weeks after surgery, Brenkus told the Acorn he’s well on his way toward his goal. He isn’t back on a bike yet, but he was fit enough to attend the Super Bowl on Feb. 3 in Atlanta.

“Before I got the surgery, I couldn’t move my knee. Now, I can flex at 140 degrees, so I feel pretty good about it,” Brenkus said.

He was among the first patients operated on with the aid of the surgical hospital’s newest tool: a $1-million Mako robot made by Stryker, a Michigan-based medical technology company founded by orthopedic surgeon Dr. Homer Stryker.The robot, the only one of its kind in operation in the region, employs a robotic arm and CTscan based software to assist surgeons in joint-replacement surgeries.

Since purchasing the Mako in November, TOSH has used the device in more than 30 procedures. With over 1,000 hips and knees operated on at the hospital each year, joint replacements are among its most popular surgeries, said Carrie Drevenstedt, director of orthopedics.

“We are the only hospital in this region, in the valley area, that has the robot,” she said. “It’s very uncommon at this point; it’s cutting-edge.”

Dr. Gregory H. Tchejeyan and Dr. Harpreet Bawa, two Mako-certified orthopedic surgeons at TOSH, performed a demonstration of the device for medical professionals and interested patients Jan. 24. They emphasized the precision of the Mako robot and how it allows for greater bone preservation, more successful outcomes and faster recovery rates.

The device allows surgeons to create a 3-D pre-operative plan before making any cuts to the bone. The robotic arm is then used to make cuts while preventing the surgeon from straying out of the predefined area. In traditional joint-replacement surgery, human error is more common, causing problems like ligaments and other structures rubbing against the replacement and wearing it down faster, Bawa said.

“With manual instruments, even very good, experienced surgeons probably hit it nine times out of 10, eight times out of 10,” the surgeon said. “But I think 10 out of 10 can be achieved with technology like this.”

Bawa said “forgotten joint scores,” or the rate of patients who forget about their implants post-surgery, are typically low for knee replacements.

“We’re hoping that this type of (technology) can help us get to a higher rate,” he said.

The cost of a robot-aided procedure is no different than the cost of a traditional one, Drevenstedt said.

She said the Mako robot is a great addition to the two da Vinci surgical systems already in use at TOHS and another a big step toward providing less invasive surgical procedures. The da Vinci is a robotic system that allows physicians to perform extremely small, precise and minimally invasive surgeries.

Of the 11 orthopedic surgeons at TOSH, three have been certified to perform surgeries using the Mako robot. Drevenstedt said they hope to increase that number.

Brenkus said the opportunity to have the surgery robotically made the cost of his flight to Southern California worth it.

“If (patients) are the same as I am, and all their ligaments are still intact, then I would say yeah, 100 percent, do this surgery,” Brenkus said. “It’s going to be a lot quicker recovery; you can be more active. I absolutely would recommend it.”

To learn more about the Mako robot and other services offered at TOSH, click here.

You Don't Have to live with
Hip or knee pain